The fluids in your car are its life blood. While most owners religiously change the motor oil at regular intervals, many don’t give the other important fluids much thought other than topping them off occasionally. Admittedly, the engine oil does take tremendous abuse. Particularly in a turbo-charged car. The engine hammers the oil harder and the oil is forced to circulate through the exhaust heated turbo-chargers. Then there is dilution with gasoline and water. Oxidation is also a problem.

The oil in the manual transmission, rear axle and steering also take abuse, particularly in a high performance car. Since these units are usually vented to the atmosphere they are also subject to water condensation and oxidation. Despite the oil’s best efforts to lubricate gear teeth gnashing together, wear produced metal particles are being circulated by the oil in ever increasing numbers. In an automatic transmission there are the added problems of friction material from the clutches circulating and the elevated heat. It’s a good idea to change the oil in these units at least biannually and to use the recommended quality products. 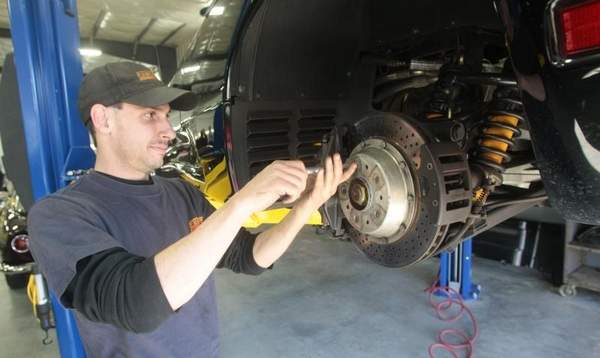 Brake and clutch hydraulic fluids are also subject to heat and water absorption. As a matter of fact, to avoid the possibility of a drop of accumulated condensation ever freezing and blocking a brake line, brake fluid was designed to disperse that water throughout the system. The problem is that the water disperses all the way to the brake piston seals which have oxygen from the atmosphere just on the other side. What do you get when water, oxygen and iron get together? Rust! When old stale brake fluid is allowed to sit long enough, as in an exotic sports car which is only driven occasionally, a ring of rust develops just behind the brake piston seal. The seal that has to have a smooth bore to slide on, is now running over rust and pitting! The result? Leakage.

Brakes also get hot. The more you need them the hotter they get. Water turns to steam if it gets hot enough. Hydraulic fluid is incompressible, steam is not. The possibility exists that you might be coming down a long hill and have to use the brakes a lot. The pedal could go to the floor as the steam in the brake lines compresses under pressure. Result? No brakes.

Brake fluid is relatively cheap and painless to change. If done annually the hydraulic components would last almost indefinitely. Use good D.O.T.4 brake fluid from sealed cans. Silicone brake fluid (D.O.T.5) does not absorb water but I don’t use it. Some rubber parts will become soft from coming in contact with silicone and I also feel that it will leak from places that D.O.T.4 fluid will not leak from. For classic GT owners, or if your car has French hydraulics, changing the fluid biannually is also a good idea. Use only genuine Citroen LHM fluid and keep some spare liters on hand, only a very few sell it.

The cooling system should only have a high quality antifreeze and distilled water 50/50 mix in it. I’ve used Sierra, the new non toxic antifreeze in my truck but the last time I used it, the bottle had nothing on it about being aluminum safe so I’m skeptical about using it. Distilled water is cheap. The average car takes about 2 gallons. Tap water (and bottled spring water) is full of minerals which are good for us and the plants but bad for any car. Ever look inside of a tea kettle? Kettle stone will form on the inside of your radiator and engine cooling passages insulating them, causing your car to run hot. Eventually the deposits, mostly calcium, will push your radiator apart and make it leak.

A great alternative to water and antifreeze is Evans waterless coolant. Since it contains no water, it boils at a much higher temperature and eliminates corrosion in the cooling system. For a lot more details on this great product go to http://www.evanscooling.com.

The battery should also only get distilled water. Mineral deposits inside your battery don’t do it any good. Most batteries don’t come with six little caps across the top anymore, but many of them have semi-hidden covers which can be pried up. Make sure the plates inside the battery are covered with fluid but don’t fill to the bottoms of the filler holes unless the battery is fully charged. the fluid expands as the battery charges.

Greasing universal joints and suspension joints on a fairly regular basis is a good habit. sure there’s still grease in there, but unlike adding a few quarts of oil to an engine, pumping grease into an assembly pushes out the old lubricant along with all the impurities that may have collected such as water, dust and microscopic metal particles. Constant velocity (C.V.) joints should be taken off the car, washed and relubricated with C.V. joint grease only. Make sure rubber boots are in good condition. If you think you have been driving with a ripped boot for a while, replace the C.V. joint. They do not take kindly to running without lubrication.

Wurth, a German company that sells chemicals and metric hardware over here, markets a windshield washer concentrate that they claim does not harm your wiper blades. I have not done scientific testing so I can’t vouch for it, but you could mix it with distilled water and possibly lessen water spotting your paint. I imagine that the blue stuff in gallon jugs is made with tap water and the alcohol probably does the rubber blades no good at all.