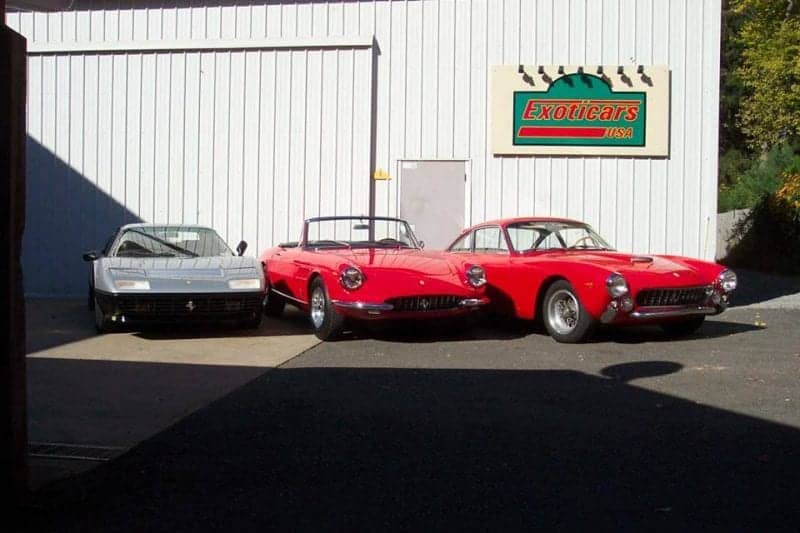 This photo was taken as the center car, a 1965 Ferrari 330 GTS, was about to be loaded into the trailer for the trip back to it’s owner. This is a really nice car for cruising around on a sunny fall day. It’s not too big and not too small – a nicely sized traditional sports car with plenty of power from it’s 4 liter V-12 and nice handling. It’s a real pleasure to drive and to behold. I guess it’s market value reflects that.

The 330 GTS was in for an annual service. On the road test we noticed a slight hesitation in the brakes. The car was raised on a lift and one of our technicians applied pedal pressure while another tech checked the brakes over and found a big bulge in the right front brake hose. New brake hoses were installed and off she goes.

The Ferrari on the right is a 1963 250 GT Berlinetta Lusso (luxury coupe). It is basically a road going version of the 250 GT Berlinetta SWB (short wheel base) competition car and is one of the prettiest Ferraris ever made. It’s a nice little car with a 3 liter V12 and early disk brakes. Unfortunately it’s a bit cramped for my 6′ – 2″ frame but that’s not the car’s fault.

The Lusso is in our shop for some work on the fuel system, cooling system, steering and electricals and is about ready to go home also.

The silver Ferrari on the left is a 1975 365 GT4 BB (Berlinetta Boxer) It has a horizontally opposed 12 cylinder engine which is the reason for the Boxer name since the two banks of pistons move back and forth, towards and away from each other like boxing gloves in a fight. This is considered the first mid-engine Ferrari. The 246 Dino came before it but at the time the Dino was considered a separate brand by Ferrari management. This was a fast car in it’s day and is still no slouch. I’m told this car was imported and personally owned by Luigi Chinetti, displayed on the Ferrari stand at the International Auto Show in the old Colosseum. I think the CNN building stands there now but I remember many exciting trips to the Colosseum to see the latest offerings.

This car is here for a partial restoration and is very close to completion.

Ferrari Fall Festival with the FCA